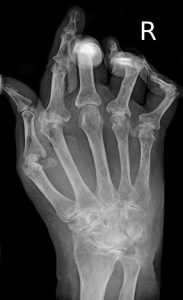 Rheumatoid arthritis (RA) is among the most prevalent of the rheumatic diseases with a lifetime prevalence of 3.6% in women and 1.7% in men [1]. It is a chronic, systemic, inflammatory autoimmune disease of variable clinical course that can severely impact physical functional status and even mortality. Over the past 30 years, as the armamentarium of therapies for RA has exploded, there has been increased debate about the ideal initial therapy. The BeSt (Dutch: Behandel-Strategieën “treatment strategies”) trial was designed to compare, according to the authors, four of “the most frequently used and discussed strategies.” Regimens incorporating traditional disease-modifying antirheumatic drugs (DMARDs), such as methotrexate, and newer therapies, such as TNF-alpha inhibitors, were compared directly.

The trial enrolled 508 DMARD-naïve patients with early rheumatoid arthritis. Pertinent exclusion criteria included history of cancer and pre-existing laboratory abnormalities or comorbidities (e.g. elevated creatinine or ALT, alcohol abuse, pregnancy or desire to conceive, etc.) that would preclude the use of various DMARDs. Patients were randomized to one of four treatment groups. Within each regimen, the Disease Activity Score in 44 joints (DAS-44) was assessed q3 months, and, if > 2.4, the medication regimen was uptitrated to the next step within the treatment group.

Once clinical response was adequate for at least 6 months, there was a protocol for tapering the drug regimen.

Overall, among patients with early RA, initial combination therapy that included either prednisone (group 3) or infliximab (group 4) resulted in better functional and radiographic improvement than did initial therapy with sequential monotherapy (group 1) or step-up combination therapy (group 2). In the discussion, the authors note that given the treatment group differences in radiographic progression of disease, “starting therapy with a single DMARD would be a missed opportunity in a considerable number of patients.” Contemporary commentary by Weisman notes that “the authors describe both an argument and a counterargument arising from their observations: aggressive treatment with combinations of expensive drugs would ‘overtreat’ a large proportion of patients, yet early suppression of disease activity may have an important influence on subsequent long‐term disability and damage.”

Fourteen years later, it is a bit difficult to place the specific results of this trial in our current practice. Its trial design is absolutely byzantine and compares the 1-year experience of a variety of complex protocols that theoretically have substantial eventual potential overlap. Furthermore, it is difficult to assess if the relatively small group differences in symptom (D-HAQ) and radiographic (SHS) scales were truly clinically significant even if they were statistically significant. The American College of Rheumatology 2015 Guideline for the Treatment of Rheumatoid Arthritis synthesized the immense body of literature that came before and after the BeSt study and ultimately gave a variety of conditional statements about the “best practice” treatment of symptomatic early RA. (See Table 2 on page 8.) The recommendations emphasized DMARD monotherapy as the initial strategy but in the specific setting of a treat-to-target strategy. They also recommended escalation to combination DMARDs or biologics in patients with moderate or high disease activity despite DMARD monotherapy.