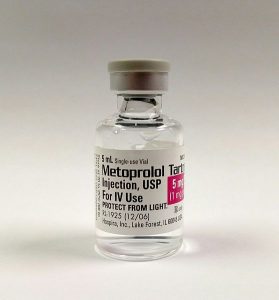 Non-cardiac surgery is commonly associated with major cardiovascular complications. It has been hypothesized that perioperative beta blockade would reduce such events by attenuating the effects of the intraoperative increases in catecholamine levels. Prior to the 2008 POISE trial, small- and moderate-sized trials had revealed inconsistent results, alternately demonstrating benefit and non-benefit with perioperative beta blockade. The POISE trial was a large RCT designed to assess the benefit of extended-release metoprolol succinate (vs. placebo) in reducing major cardiovascular events in patients of elevated cardiovascular risk.

Results:
9298 patients were randomized. However, fraudulent activity was detected at participating sites in Iran and Colombia, and thus 947 patients from these sites were excluded from the final analyses. Ultimately, 4174 were randomized to the metoprolol group, and 4177 were randomized to the placebo group. There were no significant differences in baseline characteristics, pre-operative cardiac medications, surgery type, or anesthesia type between the two groups (see Table 1).

Regarding the primary outcome, metoprolol patients were less likely than placebo patients to experience the primary composite endpoint of cardiovascular death, non-fatal MI, and non-fatal cardiac arrest (HR 0.84, 95% CI 0.70-0.99, p = 0.0399). See Figure 2A for the relevant Kaplan-Meier curve. Note that the curves separate distinctly within the first several days.

Subgroup analysis did not reveal any significant interaction with the primary outcome by RCRI, sex, type of surgery, or anesthesia type.

This study affirms its central hypothesis – that blunting the catecholamine surge of surgery is beneficial from a cardiac standpoint. (Most patients in this study had an RCRI of 1 or 2.) However, the attendant increase in all-cause mortality is dramatic. The increased mortality is thought to result from delayed recognition of sepsis due to masking of tachycardia. Beta blockade may also limit the physiologic hemodynamic response necessary to successfully fight a serious infection. In retrospective analyses mentioned in the discussion, the investigators state that they cannot fully explain the increased risk of stroke in the metoprolol group. However, hypotension attributable to beta blockade explains about half of the increased number of strokes.

Overall, the authors conclude that “patients are unlikely to accept the risks associated with perioperative extended-release metoprolol.”

A major limitation of this study is the fact that 10% of enrolled patients were discarded in analysis due to fraudulent activity at selected investigation sites. In terms of generalizability, it is important to remember that POISE excluded patients who were already on beta blockers.

POISE is an important piece of evidence underpinning the 2014 ACC/AHA Guideline on Perioperative Cardiovascular Evaluation and Management of Patients Undergoing Noncardiac Surgery, which includes the following recommendations regarding beta blockers:

by the Hypothermia After Cardiac Arrest Study Group

Neurologic injury after cardiac arrest is a significant source of morbidity and mortality. It is hypothesized that brain reperfusion injury (via the generation of free radicals and other inflammatory mediators) following ischemic time is the primary pathophysiologic basis. Animal models and limited human studies have demonstrated that patients treated with mild hypothermia following cardiac arrest have improved neurologic outcome. The 2002 HACA study sought to evaluate prospectively the utility of therapeutic hypothermia in reducing neurologic sequelae and mortality post-arrest.

Population: European patients who achieve return of spontaneous circulation (ROSC) after presenting to the ED in cardiac arrest

Results:
3551 consecutive patients were assessed for enrollment and ultimately 275 met inclusion criteria and were randomized. The normothermia group had more baseline DM and CAD and were more likely to have received BLS from a bystander prior to the ED.

Implication/Discussion:
In ED patients with Vfib or pulseless VT arrest who did not have meaningful response to commands after ROSC, immediate therapeutic hypothermia reduced the rate of neurologic sequelae and mortality at 6 months.

Corresponding practice point from Dr. Sonti and Dr. Vinayak and their Georgetown Critical Care Top 40: “If after ROSC your patient remains unresponsive and does not have refractory hypoxemia/hypotension/coagulopathy, you should initiate therapeutic hypothermia even if the arrest was PEA. The benefit seen was substantial and any proposed biologic mechanism would seemingly apply to all causes of cardiac arrest. The investigators used pancuronium to prevent shivering; [at MGUH] there is a ‘shivering’ protocol in place and if refractory, paralytics can be used.”

This trial, as well as a concurrent publication by Benard et al. ushered in a new paradigm of therapeutic hypothermia or “targeted temperature management” (TTM) following cardiac arrest. Numerous trials in related populations and with modified interventions (e.g. target temperature 36º C) were performed over the following decade, and ultimately led to the current standard of practice.

Per UpToDate, the collective trial data suggest that “active control of the post-cardiac arrest patient’s core temperature, with a target between 32 and 36ºC, followed by active avoidance of fever, is the optimal strategy to promote patient survival.” TTM should be undertaken in all patients who do not follow commands or have purposeful movements following ROSC. Expert opinion at UpToDate recommends maintaining temperature control for at least 48 hours. 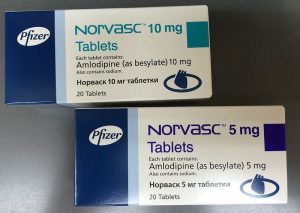 Hypertension is a ubiquitous disease, and the cardiovascular and mortality benefits of BP control have been well described. However, as the number of available antihypertensive classes proliferated in the past several decades, a head-to-head comparison of different antihypertensive regimens was necessary to determine the optimal first-step therapy. The 2002 ALLHAT trial was a landmark trial in this effort.

Intervention:
Prior antihypertensives were discontinued upon initiation of the study drug. Patients were randomized to one of three study drugs in a double-blind fashion. Study drugs and additional drugs were added in a step-wise fashion to achieve a goal BP < 140/90 mmHg.

Comparison:
Pairwise comparisons with respect to outcomes of chlorthalidone vs. either amlodipine or lisinopril. A doxazosin arm existed initially, but it was terminated early due to an excess of CV events, primarily driven by CHF.

Results:
Over a mean follow-up period of 4.9 years, there was no difference between the groups in either the primary outcome or all-cause mortality.

When comparing amlodipine to chlorthalidone for the pre-specified secondary outcomes, amlodipine was associated with an increased risk of heart failure (RR 1.38; 95% CI 1.25-1.52).

Discussion:
In patients with hypertension and one risk factor for CAD, chlorthalidone, lisinopril, and amlodipine performed similarly in reducing the risks of fatal CAD and nonfatal MI.

The study has several strengths: a large and diverse study population, a randomized, double-blind structure, and the rigorous evaluation of three of the most commonly prescribed “newer” classes of antihypertensives. Unfortunately, neither an ARB nor an aldosterone antagonist was included in the study. Additionally, the step-up therapies were not reflective of contemporary practice. (Instead, patients would likely be prescribed one or more of the primary study drugs.)

The ALLHAT study is one of the hallmark studies of hypertension and has played an important role in hypertension guidelines since it was published. Following the publication of ALLHAT, thiazide diuretics became widely used as first line drugs in the treatment of hypertension. The low cost of thiazides and their limited side-effect profile are particularly attractive class features. While ALLHAT looked specifically at chlorthalidone, in practice the positive findings were attributed to HCTZ, which has been more often prescribed. The authors of ALLHAT argued that the superiority of thiazides was likely a class effect, but according to the analysis at Wiki Journal Club, “there is little direct evidence that HCTZ specifically reduces the incidence of CVD among hypertensive individuals.” Furthermore, a 2006 study noted that that HCTZ has worse 24-hour BP control than chlorthalidone due to a shorter half-life. The ALLHAT authors note that “since a large proportion of participants required more than 1 drug to control their BP, it is reasonable to infer that a diuretic be included in all multi-drug regimens, if possible.” The 2017 ACC/AHA High Blood Pressure Guidelines state that, of the four thiazide diuretics on the market, chlorthalidone is preferred because of a prolonged half-life and trial-proven reduction of CVD (via the ALLHAT study). 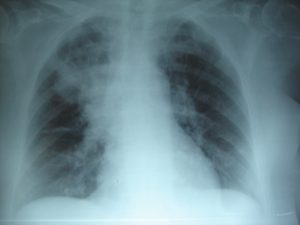 Ventilator-associated pneumonia (VAP) is a frequent complication of mechanical ventilation and, prior to this study, few trials had addressed the optimal duration of antibiotic therapy in VAP. Thus, patients frequently received 14- to 21-day antibiotic courses. As antibiotic stewardship efforts increased and awareness grew of the association between prolonged antibiotic courses and the development of multidrug resistant (MDR) infections, more data were needed to clarify the optimal VAP treatment duration.

This 2003 trial by the PneumA Trial Group was the first large randomized trial to compare shorter (8-day) versus longer (15-day) treatment courses for VAP.

The noninferiority study, carried out in 51 French ICUs, enrolled intubated patients with clinical suspicion for VAP and randomized them to either 8 or 15 days of antimicrobials. Antimicrobial regimens were chosen by the treating clinician. 401 patients met eligibility criteria. 197 were randomized to the 8-day regimen. 204 patients were randomized to the 15-day regimen. Study participants were blinded to randomization assignment until day 8. Analysis was performed using an intention-to-treat model. The primary outcomes measured were death from any cause at 28 days, antibiotic-free days, and microbiologically documented pulmonary infection recurrence.

Implications/Discussion:
There is no benefit to prolonging VAP treatment to 15 days (except perhaps when Pseudomonas aeruginosa is suspected based on gram stain/culture data). Shorter courses of antibiotics for VAP treatment allow for less antibiotic exposure without increasing rates of recurrent infection or mortality.

The 2016 IDSA guidelines on VAP treatment recommend a 7-day course of antimicrobials for treatment of VAP (as opposed to a longer treatment course such as 8-15 days). These guidelines are based on the IDSA’s own large meta-analysis (of 10 randomized trials, including PneumA, as well as an observational study) which demonstrated that shorter courses of antibiotics (7 days) reduce antibiotic exposure and recurrent pneumonia due to MDR organisms without affecting clinical outcomes, such as mortality. Of note, this 7-day course recommendation also applies to treatment of lactose-nonfermenting GNRs, such as Pseudomonas.

When considering the PneumA trial within the context of the newest IDSA guidelines, we see that we now have over 15 years of evidence supporting the use of shorter VAP treatment courses.

Further Reading/References:
1. 2016 IDSA Guidelines for the Management of HAP/VAP
2. PneumA @ Wiki Journal Club
3. PulmCCM “IDSA Guidelines 2016: HAP, VAP & It’s the End of HCAP as We Know It (And I Feel Fine)”
4. PulmCrit “The siren’s call: Double-coverage for ventilator associated PNA”