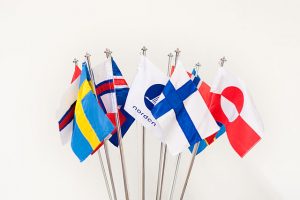 In conclusion, simvastatin therapy reduced mortality in patients with known CAD and hypercholesterolemia via reduction of major coronary events. This was a large, well-designed, double-blind RCT that ushered in the era of widespread statin use for secondary, and eventually, primary prevention of ASCVD. For further information about modern guidelines for the use of statins, please see the 2013 “ACC/AHA Guideline on the Treatment of Blood Cholesterol to Reduce Atherosclerotic Cardiovascular Risk in Adults” and the 2016 USPSTF guideline “Statin use for the Primary Prevention of Cardiovascular Disease in Adults: Preventive Medication”.

References / Additional Reading:
1. 4S @ Wiki JournalClub
2. “2013 ACC/AHA Guideline on the Treatment of Blood Cholesterol to Reduce Atherosclerotic Cardiovascular Risk in Adults”
3. “Statin use for the Primary Prevention of Cardiovascular Disease in Adults: Preventive Medication” (2016)
4. UpToDate, “Society guideline links: Lipid disorders in adults”
5. “A historical perspective on the discovery of statins” (2010) 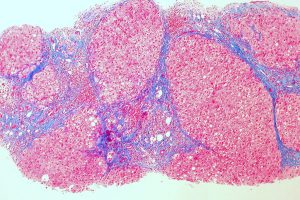 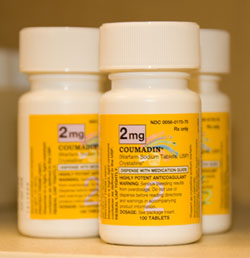 Atrial fibrillation is the most common cardiac arrhythmia and affects 1-2% of the overall population with increasing prevalence as people age. Atrial fibrillation also carries substantial morbidity and mortality due to the risk of stroke and thromboembolism although the risk of embolic phenomenon varies widely across various subpopulations. In 2001, the only oral anticoagulation options available were warfarin and aspirin, which had relative risk reductions of 62% and 22%, respectively, consistent across these subpopulations. Clinicians felt that high risk patients should be anticoagulated, but the two common classification schemes, AFI and SPAF, were flawed. Patients were often classified as low risk in one scheme and high risk in the other. The schemes were derived retrospectively and were clinically ambiguous. Therefore, in 2001, a group of investigators combined the two existing schemes to create the CHADS2 scheme and applied it to a new data set.

As CHADS2 became widely used clinically in the early 2000s, its application to other cohorts generated a large intermediate-risk group (CHADS2 = 1), which was sometimes > 60% of the cohort (though in the NRAF cohort, CHADS2 = 1 accounted for 27% of the cohort). In clinical practice, this intermediate-risk group was to be offered either warfarin or aspirin. Clearly, a clinical-risk predictor that does not provide clear guidance in over 50% of patients needs to be improved. As a result, the CHA2DS2-VASc scoring system was developed from the Birmingham 2009 scheme. When compared head-to-head in registry data, CHA2DS2-VASc more effectively discriminated stroke risk among patients with a baseline CHADS2 score of 0 to 1. Because of this, CHA2DS2-VASc is the recommended risk stratification scheme in the AHA/ACC/HRS 2014 Practice Guideline for Atrial Fibrillation. In modern practice, anticoagulation is unnecessary when CHA2DS2-VASc score = 0, should be considered (vs. antiplatelet or no treatment) when score = 1, and is recommended when score ≥ 2. 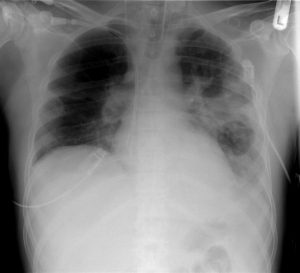 Community-acquired pneumonia (CAP) is frequently encountered by the admitting medicine team. Ideally, the patient’s severity at presentation and risk for further decompensation should determine the appropriate setting for further care, whether as an outpatient, on an inpatient ward, or in the ICU. At the time of this 2003 study, the predominant decision aid was the 20-variable Pneumonia Severity Index. The authors of this study sought to develop a simpler decision aid for determining the appropriate level of care at presentation.

The study examined the 30-day mortality rates of adults admitted for CAP via the ED at three non-US academic medical centers (data from three previous CAP cohort studies). 80% of the dataset was analyzed as a derivation cohort – meaning it was used to identify statistically significant, clinically relevant prognostic factors that allowed for mortality risk stratification. The resulting model was applied to the remaining 20% of the dataset (the validation cohort) in order to assess the accuracy of its predictive ability.

The following variables were integrated into the final model (CURB-65):

1068 patients were analyzed. 821 (77%) were in the derivation cohort. 86% of patients received IV antibiotics, 5% were admitted to the ICU, and 4% were intubated. 30-day mortality was 9%. 9 of 11 clinical features examined in univariate analysis were statistically significant (see Table 2).

Ultimately, using the above-described CURB-65 model, in which 1 point is assigned for each clinical characteristic, patients with a CURB-65 score of 0 or 1 had 1.5% mortality, patients with a score of 2 had 9.2% mortality, and patients with a score of 3 or more had 22% mortality. Similar values were demonstrated in the validation cohort. Table 5 summarizes the sensitivity, specificity, PPVs, and NPVs of each CURB-65 score for 30-day mortality in both cohorts. As we would expect from a good predictive model, the sensitivity starts out very high and decreases with increasing score, while the specificity starts out very low and increases with increasing score. For the clinical application of their model, the authors selected the cut points of 1, 2, and 3 (see Figure 2).

In conclusion, CURB-65 is a simple 5-variable decision aid that is helpful in the initial stratification of mortality risk in patients with CAP.

Following the publication of the CURB-65 Score, the author of the Pneumonia Severity Index (PSI) published a prospective cohort study of CAP that examined the discriminatory power (area under the receiver operating characteristic curve) of the PSI vs. CURB-65. His study found that the PSI “has a higher discriminatory power for short-term mortality, defines a greater proportion of patients at low risk, and is slightly more accurate in identifying patients at low risk” than the CURB-65 score.

Expert opinion at UpToDate prefers the PSI over the CURB-65 score based on its more robust base of confirmatory evidence. Of note, the author of the PSI is one of the authors of the relevant UpToDate article. In an important contrast from the CURB-65 authors, these experts suggest that patients with a CURB-65 score of 0 be managed as outpatients, while patients with a score of 1 and above “should generally be admitted.”