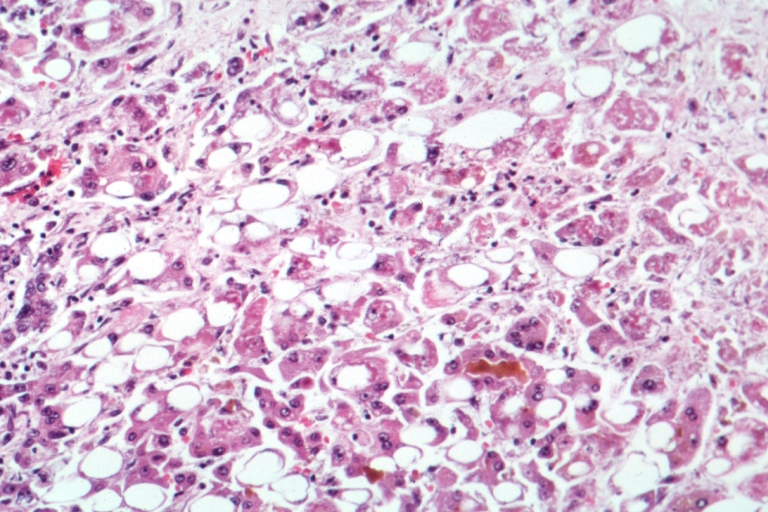 “Prednisolone or Pentoxifylline for Alcohol Hepatitis”

aka the Steroids or Pentoxifylline for Alcoholic Hepatitis (STOPAH) trial

The trial enrolled adults with a clinical diagnosis of alcoholic hepatitis, average alcohol consumption > 80 gm/day in men or 60 gm/day in women, total bilirubin > 4.7mg/dL, and a Maddrey discriminant function ≥ 32. Patients were randomized to one of the following four groups for 28 days of treatment.

Regarding randomization of the 1103 patients, 276 were randomized to placebo-placebo, 277 to prednisolone-placebo, 276 to pentoxifylline-placebo, and 274 to prednisolone-pentoxifylline. The trial was stopped early due to “limitations on funding.” However, all enrolled patients completed at least 28 days of follow-up. 33 patients were unable to complete 90-day and 1-year follow-up due to termination of the trial.

Implication/Discussion:
In patients with severe alcoholic hepatitis, neither prednisolone nor pentoxifylline reduced morality risk at 28 days. Additionally, neither drug reduced the combined secondary endpoint of mortality or liver transplantation at 90 days or 1 year.

This was a well-designed, randomized, double-blind, double-placebo-controlled trial. A notable limitation was this trial’s reliance on the clinical diagnosis of alcohol hepatitis, rather than tissue diagnosis. This may have reduced the power of the trial with respect to detecting a treatment effect. Contemporary authors also noted that harm may have come to study patients due to a lack of tapering of prednisolone at the end of the 28 days of treatment.

Despite the negative results of this specific trial, corticosteroid treatment has remained a mainstay of the treatment of severe alcoholic hepatitis.

The generally accepted practice, as summarized by UpToDate, is treatment with prednisolone 40mg PO daily for 28 days in patients with discriminant function ≥ 32. (Prednisolone is preferred over prednisone because prednisone requires conversion in the liver to its active form prednisolone, and such conversion can be impaired in liver dysfunction.) Therapy should be terminated early after 7 days if patients fail to show improvement (either by parameters such as bilirubin or discriminant function or by improvement in the Lille score).

“Rituximab versus Cyclophosphamide for ANCA-Associated Vasculitis”

ANCA-associated vasculitides, such as granulomatosis with polyangiitis (GPA, formerly Wegener’s granulomatosis) and microscopic polyangiitis (MPA) are often rapidly progressive and highly morbid. Mortality in untreated generalized GPA can be as high as 90% at 2 years. Since the early 1980s, cyclophosphamide (CYC) with corticosteroids has been the best treatment option for induction of disease remission in GPA and MPA. Unfortunately, the immediate and delayed adverse effect profile of CYC can be burdensome. The role of B lymphocytes in the pathogenesis of these diseases has been increasingly appreciated over the past 20 years, and this association inspired uncontrolled treatment studies with the anti-CD20 agent rituximab that demonstrated promising preliminary results. Thus the RAVE trial was performed to compare rituximab to cyclophosphamide, the standard of care.

Population:      ANCA-positive patients with “severe” GPA or MPA and a Birmingham Vasculitis Activity Score for Wegener’s Granulomatosis (BVAS/WG) of 3+.

primary end point = clinical remission, defined as a BVAS/WG of 0 and successful completion of prednisone taper

secondary outcomes = rate of disease flares, BVAS/WG of 0 during treatment with prednisone at a dose of less than 10mg/day, cumulative glucocorticoid dose, rates of adverse events, SF-36 scores

Results:
197 patients were randomized, and baseline characteristics were similar among the two groups (e.g. GPA vs. MPA, relapsed disease, etc.). 75% of patients had GPA. 64% of the patients in the rituximab group reached remission, while 53% of the control patients did. This 11 percentage point difference among the treatment groups was consistent with non-inferiority (p < 0.001). However, although more rituximab patients reached the primary endpoint, the difference between the two groups was statistically insignificant, and thus superiority of rituximab could not be established (95% CI -3.2 – 24.3 percentage points difference, p = 0.09). Subgroup analysis was notable only for superiority of rituximab in relapsed patients (67% remission rate vs. 42% in controls, p=0.01). Rates of adverse events and treatment discontinuation were similar among the two groups.

Implication/Discussion:
Rituximab + steroids is as effective as cyclophosphamide + steroids in inducing remission in severe GPA and MPA.

This study initiated a major paradigm shift in the standard of care of ANCA-associated vasculitis. The following year, the FDA approved rituximab + steroids as the first-ever treatment regimen approved for GPA and MPA.  It spurred numerous follow up trials, and to this day expert opinion is split over whether CYC or rituximab should be the initial immunosuppressive therapy in GPA/MPA with “organ-threatening or life-threatening disease.”

Non-inferiority trials are increasingly common, and careful attention needs to be paid to their methodology. Please read more in the following two articles: [http://www.nejm.org/doi/full/10.1056/NEJMra1510063] and [http://www.rds-sc.nihr.ac.uk/study-design/quantitative-studies/clinical-trials/non-inferiority-trials/]

Atrial fibrillation (AF) is a well-known risk factor for ischemic stroke. Stroke risk is further increased by individual comorbidities, such as CHF, HTN, and DM, and can be stratified with scores, such as CHADS2 and CHA2DS2VASC. Patients with intermediate stroke risk are recommended to be treated with oral anticoagulation (OAC). However, stroke risk is often also closely related to bleeding risk, and the benefits of anticoagulation for stroke need to be weighed against the added risk of bleeding. At the time of this study, there were no validated and user-friendly bleeding risk-stratification schemes. This study aimed to develop a practical risk score to estimate the 1-year risk of major bleeding (as defined in the study) in a contemporary, real world cohort of patients with AF.

The study enrolled adults with an EKG or Holter-proven diagnosis of AF. (Patients with mitral valve stenosis or previous valvular surgery were excluded.) No experiment was performed in this retrospective cohort study.

In a derivation cohort, the authors retrospectively performed univariate analyses to identify a range of clinical features associated with major bleeding (p < 0.10). Based on systematic reviews, they added additional risk factors for major bleeding. Ultimately, what resulted was a list of comprehensive risk factors deemed HAS-BLED:

B – Bleeding (prior major bleed or predisposition to bleed)

D – Drugs (i.e. ASA, clopidogrel, NSAIDs) or alcohol use (> 8 units per week) concomitantly – 1 pt each for use of either

Each risk factor was equivalent to one point. The HAS-BLED score was then compared to the HEMORR2HAGES scheme, a prior tool for estimating bleeding risk.

Results:
3,456 patients with AF without mitral valve stenosis or valve surgery who completed their 1-year follow-up were analyzed retrospectively. 64.8% (2242) of these patients were on OAC (12.8% of whom on concurrent antiplatelet therapy), 24% (828) were on antiplatelet therapy alone, and 10.2% (352) received no antithrombotic therapy. 1.5% (53) of patients experienced a major bleed during the first year, with 17% (9) of these patients sustaining intracerebral hemorrhage.

Patients were given a HAS-BLED score and a HEMORR2HAGES score. C-statistics were then used to determine the predictive accuracy of each model overall as well as within patient subgroups (OAC alone, OAC + antiplatelet, antiplatelet alone, no antithrombotic therapy).

Implication/Discussion:
This study helped to establish a practical and user-friendly assessment of bleeding risk in AF. HAS-BLED is superior to its predecessor HEMORR2HAGES in that it has an easier-to-remember acronym and is quicker and simpler to perform. All of its risk factors are readily available from the clinical history or are routinely tested. Both stratification tools had a broadly similar c-statistics for the overall cohort – 0.72 for HAS-BLED versus 0.66 for HEMORR2HAGES respectively. However, HAS-BLED was particularly useful when looking at antiplatelet therapy alone or no antithrombotic therapy at all (0.91 and 0.85, respectively).

This study is useful because it provides evidence-based, easily-calculable, and actionable risk stratification in assessing bleeding risk in AF. In prior studies, such as ACTIVE-A (ASA + clopidogrel versus ASA alone for patients with AF deemed unsuitable for OAC), almost half of all patients (n= ~3500) were given a classification of “unsuitable for OAC,” which was based solely on physician clinical judgement alone without a predefined objective scoring. Now, physicians have an objective way to assess bleed risk rather than “gut feeling” or wanting to avoid iatrogenic insult.

The RE-LY trial used the HAS-BLED score to decide which patients with AF should get the standard dabigatran dose (150mg BID) versus a lower dose (110mg BID) for anticoagulation. This risk-stratified dosing resulted in a significant reduction in major bleeding compared with warfarin and maintained a similar reduction in stroke risk.

Furthermore, the HAS-BLED score could allow the physician to be more confident when deciding which patients may be appropriate for referral for a left atrial appendage occlusion device (e.g. Watchman).

Limitations:
The study had a limited number of major bleeds and a short follow-up period, and thus it is possible that other important risk factors for bleeding were not identified. Also, there were large numbers of patients lost to 1-year follow-up. These patients were likely to have had more comorbidities and may have transferred to nursing homes or even have died – which may have led to an underestimate of bleeding rates. Furthermore, the study had a modest number of very elderly patients (i.e. 75-84 and ≥ 85), who are likely to represent the greatest bleeding risk.

Bottom Line:
HAS-BLED provides an easy, practical tool to assess the individual bleeding risk of patients with AF. Oral anticoagulation should be considered for scores of 3 or less. When HAS-BLED scores are ≥ 4, it is reasonable to think about alternatives to oral anticoagulation.