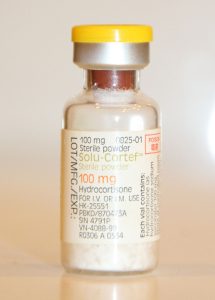 Steroid therapy in septic shock has been a hotly debated topic since the 1980s. The Annane trial in 2002 suggested that there was a mortality benefit to early steroid therapy and so for almost a decade this became standard of care. In 2008, the CORTICUS trial was performed suggesting otherwise.

The trial enrolled ICU patients with septic shock onset with past 72 hrs (defined as SBP < 90 despite fluids or need for vasopressors and hypoperfusion or organ dysfunction from sepsis). Excluded patients included those with an “underlying disease with a poor prognosis,” life expectancy < 24hrs, immunosuppression, and recent corticosteroid use. Patients were randomized to hydrocortisone 50mg IV q6h x5 days plus taper or to placebo injections q6h x5 days plus taper. The primary outcome was 28-day mortality among patients who did not have a response to ACTH stim test (cortisol rise < 9mcg/dL). Secondary outcomes included 28-day mortality in patients who had a positive response to ACTH stim test, 28-day mortality in all patients, reversal of shock (defined as SBP ≥ 90 for at least 24hrs without vasopressors) in all patients and time to reversal of shock in all patients.

In conclusion, the CORTICUS trial demonstrated no mortality benefit of steroid therapy in septic shock regardless of a patient’s response to ACTH. Despite the lack of mortality benefit, it demonstrated an earlier resolution of shock with steroids. This lack of mortality benefit sharply contrasted with the previous Annane 2002 study. Several reasons have been posited for this difference including poor powering of the CORTICUS study (which did not reach the desired n = 800), inclusion starting within 72 hrs of septic shock vs. Annane starting within 8 hrs, and the overall sicker nature of Annane patients (who were all mechanically ventilated). Subsequent meta-analyses disagree about the mortality benefit of steroids, but meta-regression analyses suggest benefit among the sickest patients. All studies agree about the improvement in shock reversal. The 2016 Surviving Sepsis Campaign guidelines recommend IV hydrocortisone in septic shock in patients who continue to be hemodynamically unstable despite adequate fluid resuscitation and vasopressor therapy.

Per Drs. Sonti and Vinayak of the GUH MICU (excepted from their excellent Georgetown Critical Care Top 40): “Practically, we use steroids when reaching for a second pressor or if there is multiorgan system dysfunction. Our liver patients may have deficient cortisol production due to inadequate precursor lipid production; use of corticosteroids in these patients represents physiologic replacement rather than adjunct supplement.”

The ANZICS collaborative group published the ADRENAL trial in NEJM in 2018 – which demonstrated that “among patients with septic shock undergoing mechanical ventilation, a continuous infusion of hydrocortisone did not result in lower 90-day mortality than placebo.” The authors did note “a more rapid resolution of shock and a lower incidence of blood transfusion” among patients receiving hydrocortisone. The folks at EmCrit argued [https://emcrit.org/emnerd/cc-nerd-case-relative-insufficiency/] that this was essentially a negative study, and thus in the existing context of CORTICUS, the results of the ADRENAL trial do not change our management of refractory septic shock.

Finally, the 2018 APPROCCHSS trial (also by Annane) evaluated the survival benefit hydrocortisone plus fludocortisone vs. placebo in patients with septic shock and found that this intervention reduced 90-day all-cause mortality. At this time, it is difficult truly discern the added information of this trial given its timeframe, sample size, and severity of underlying illness. See the excellent discussion in the following links: WikiJournal Club, PulmCrit, PulmCCM, and UpToDate.