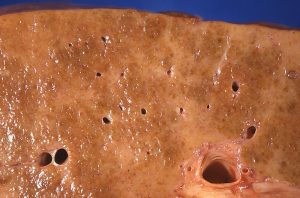 As we are well aware at Georgetown, hepatic encephalopathy (HE) is highly prevalent among patients with cirrhosis, and admissions for recurrent HE place a significant burden on the medical system. The authors of this study note that HE is thought to result from “the systemic accumulation of gut-derived neurotoxins, especially ammonia, in patients with impaired liver function and portosystemic shunting.” Lactulose is considered the standard of care for the prevention of HE. It is thought to decrease the absorption of ammonia in the gut lumen through its cathartic effects and by alteration of colonic pH. The minimally absorbable oral antibiotic rifaximin is thought to further reduce ammonia production through direct antibacterial effects within the gut lumen. Thus the authors of this pivotal 2010 study sought to determine the additive effect of daily rifaximin prophylaxis in the prevention of HE.

The study enrolled adults with cirrhosis and 2+ episodes of overt HE during the past 6 months and randomized them to treatment with either rifaximin 550mg PO BID x6 months or placebo 550mg PO BID x6 months. The primary outcome was time to first breakthrough episode of HE (West Haven Score of 2+ or West Haven Score 0 –> 1 with worsening asterixis). Secondary outcomes included time to first hospitalization involving HE and adverse events, including those “possibly related to infection.”

Thus, prophylactic rifaximin reduced the incidence of recurrent HE and its resultant hospitalizations. This landmark trial showed a clear treatment benefit with implied savings in healthcare utilization costs associated with HE recurrences and hospitalizations. This marked effect was demonstrated even in the setting of relatively good (91%) lactulose adherence in both treatment arms prior to and throughout the trial.  On the day this trial was published in 2010, the FDA approved rifaximin for “reduction in risk of overt hepatic encephalopathy recurrence” in adults.

Because rifaximin is not generic and remains quite expensive, its financial utility is limited from an insurance company’s perspective. There is no other comparable nonabsorbable antibiotic for this indication. UpToDate suggests starting with lactulose therapy and then adding a nonabsorbable antibiotic, such as rifaximin, both for the treatment of overt HE and for the prevention of recurrent HE. In practice, most insurance companies will require a prior authorization for outpatient rifaximin treatment, but in my recent experience, this process has been perfunctory and easy.