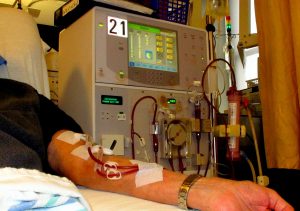 Renal transplant is the treatment of choice in patients with ESRD. Since the advent of renal transplant, it has been known that transplant improves both quality of life and survival relative to dialysis. However, these findings were derived from retrospective data and reflected inherent selection bias (patients who received transplants were healthier, younger, and of higher socioeconomic status than patients who remained on dialysis). While some smaller studies (i.e. single center or statewide database) published in the early to mid 1990s attempted to account for this selection bias by comparing outcomes among patients who received a transplant versus patients who were listed for transplant but had not yet received one, this 1999 study by Wolfe et al. was a notable step forward in that it used the large, nationwide US Renal Data System dataset and a robust multivariate hazards model to control for baseline covariates. To this day, Wolfe et al. remains a defining testament to the sustained, life-prolonging benefit of renal transplantation itself.

Using the comprehensive US Renal Data System database, the authors evaluated patients who began treatment for ESRD between 1991 and 1996. Notable exclusion criteria were age ≥ 70 and transplant prior to initiating dialysis. Of the 228,552 patients evaluated, 46,164 were placed on the transplant waitlist, and 23,275 received a transplant by the end of the study period (12/31/1997). The primary outcome was survival reported in unadjusted death rates per 100 patient-years, standardized mortality ratios (adjusted for age, race, sex, and diabetes as the cause of ESRD), and adjusted relative risk of death in transplant patients relative to waitlisted patients. Subgroup analyses were performed.

Results:
Regarding baseline characteristics, listed or transplanted patients were younger, more likely to be white or Asian, and less likely to have diabetes as the cause of their ESRD (see Table 1). Unadjusted death rates per 100 patient-years at risk: dialysis 16.1, waitlist 6.3, and transplant recipients 3.8 (no p value given, see Table 2). The standardized mortality ratio (adjusted for age, race, sex, and diabetes as the cause of ESRD) was 49% lower (RR 0.51, 95% CI 0.49–0.53, p<0.001) among patients on the waitlist and 69% lower among transplant recipients (p value not reported). The lower standardized mortality ratio of waitlisted patients relative to dialysis patients was sustained in all subgroup analyses (see Figure 1). The relative risk of death (adjusted for age, sex, race, cause of ESRD, year placed on waitlist, and time from first treatment of ESRD to placement on waitlist) is visually depicted in Figure 2. Importantly, relative to waitlisted patients, transplant recipients had a 2.8x higher risk of death during the first two weeks post-transplant. Thereafter, risk declined until the likelihood of survival equalized at 106 days post-transplant. Long term (3-4 years of follow-up in this study), mortality risk was 68% lower among transplanted patients than among waitlisted patients (RR 0.32, 95% CI 0.30–0.35, p< 0.001). The magnitude of this survival benefit varied by subgroup but was strong and statistically significant in all subgroups (ranging from 3 to 17 additional projected years of life, see Table 3).

Implication/Discussion:
Retrospective analysis of this nationwide ESRD database has clearly demonstrated the marked mortality benefit of renal transplantation over waitlisted status. This finding is present to varying degrees in all subgroups and leads to a projected additional 3 to 17 years of lifespan post-transplant. (There is an expected, mild increase in mortality risk immediately following transplantation. This increase reflects operative risk and immediate complications but is present for only 2 weeks post-transplantation.) As expected and as previously described in other datasets, this study also demonstrated that substantially healthier ESRD patients are selected for transplantation listing in the US in comparison to patients who remain on dialysis not on the waitlist.

Relative strengths of this study include its comprehensive national dataset and intention-to-treat analysis. Its multivariate analyses robustly controlled for factors, such as time on the waitlist, that may have influenced mortality. However, this study is limited in that its retrospective comparison of listed to transplanted does not entirely eliminate selection bias. (For example, listed patients may have developed illnesses that ultimately prevented transplant and lead to death.) Additionally, the mortality benefits demonstrated in this study from the first half of the 1990s may not reflect those of current practice, given that prevention and treatment of ASCVD (a primary driver of mortality in ESRD) has improved markedly in the ensuing decades and may favor one group disproportionately.

As suggested by the authors at UpToDate, improved survival post-transplant may be due to the following factors: increased clearance of uremic toxins, reduction in inflammation and/or oxidative stress, reduced microvascular disease in diabetes mellitus, and improvement of LVH.

As a final note: in this modern era, it is surprising to see both a retrospective cohort study published in NEJM as well as the lack of preregistration of its analysis protocol prior to the study being conducted. Preregistration, even of interventional trials, did not become routine until the years following the announcement of the International Committee of Medical Journal Editors (ICMJE) trial registration policy in 2004 (Zarin et al.). Although, even today, retrospective cohort studies are not routinely preregistered, high profile journals increasingly require it because it helps differentiate between confirmatory versus exploratory research and reduce the appearance of post-hoc data dredging (i.e. p-hacking). Please see the Center for Open Science – Preregistration for further information. Here is another helpful discussion in PowerPoint form by Deborah A. Zarin, MD, Director of ClinicalTrials.gov.