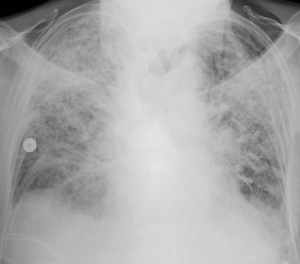 Prone positioning had been used for many years in ICU patients with ARDS in order to improve oxygenation. Per Dr. Sonti’s Georgetown Critical Care Top 40, the physiologic basis for benefit with proning lies in the idea that atelectatic regions of lung typically occur in the most dependent portion of an ARDS patient, with hyperinflation affecting the remaining lung. Periodic reversal of these regions via moving the patient from supine to prone and vice versa ensures no one region of the lung will have extended exposure to either atelectasis or overdistention. Although the oxygenation benefits have been long noted, the PROSEVA trial established mortality benefit.

Study patients were selected from 26 ICUs in France and 1 in Spain which had daily practice with prone positioning for at least 5 years. Inclusion criteria: ARDS patients intubated and ventilated <36hr with severe ARDS (defined as PaO2:FiO2 ratio < 150, PEEP > 5, and TV of about 6ml/kg of predicted body weight). (NB: by the Berlin definition for ARDS, severe ARDS is defined as PaO2:FiO2 ratio < 100.) Patients were either randomized to the intervention of proning within 36 hours of mechanical ventilation for at least 16 consecutive hours (n = 237) or to the control of being left in a semirecumbent (supine) position (n = 229). The primary outcome was mortality at day 28. Secondary outcomes included mortality at day 90, rate of successful extubation (no reintubation or use of noninvasive ventilation x48hr), time to successful extubation, length of stay in the ICU, complications, use of noninvasive ventilation, tracheotomy rate, number of days free from organ dysfunction, ventilator settings, measurements of ABG, and respiratory system mechanics during the first week after randomization.

At the time of randomization in the study, the majority of characteristics were similar between the two groups, although the authors noted differences in the SOFA score and the use of neuromuscular blockers and vasopressors. The supine group at baseline had a higher SOFA score indicating more severe organ failure, and also had higher rate of vasopressor usage. The prone group had a higher rate of usage of neuromuscular blockade. The primary outcome of 28 day mortality was significantly lower in the prone group than in the supine group, at 16.0% vs 32.8% (p < 0.001, NNT = 6.0). This mortality decrease was still statistically significant when adjusted for the SOFA score. Secondary outcomes were notable for a significantly higher rate of successful extubation in the prone group (hazard ratio 0.45; 95% CI 0.29-0.7, p < 0.001). Additionally, the PaO2:FiO2 ratio was significantly higher in the supine group, whereas the PEEP and FiO2 were significantly lower. The remainder of secondary outcomes were statistically similar.

PROSEVA showed a significant mortality benefit with early use of prone positioning in severe ARDS. This mortality benefit was considerably larger than that seen in past meta-analyses, which was likely due to this study selecting specifically for patients with severe disease as well as specifying longer prone-positioning sessions than employed in prior studies. Critics have noted the unexpected difference in baseline characteristics between the two arms of the study. While these critiques are reasonable, the authors mitigate at least some of these complaints by adjusting the mortality for the statistically significant differences. With such a radical mortality benefit it might be surprising that more patients are not proned at our institution. One reason is that relatively few of our patients have severe ARDS. Additionally, proning places a high demand on resources and requires a coordinated effort of multiple staff. All treatment centers in this study had specially-trained staff that had been performing proning on a daily basis for at least 5 years, and thus were very familiar with the process. With this in mind, we consider the use of proning in patients meeting criteria for severe ARDS.