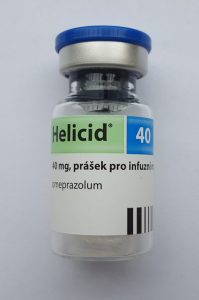 The study enrolled patients who had a bleeding gastroduodenal ulcer visualized on endoscopy and in whom hemostasis was achieved following epinephrine injection and thermocoagulation. Enrollees were randomized to treatment with either omeprazole 80mg IV bolus followed by 8mg/hr infusion x72 hours then followed by omeprazole 20mg PO x8 weeks or to placebo bolus + drip x72 hours followed by omeprazole 20mg PO x8 weeks. The primary outcome was recurrent bleeding within 30 days. Secondary outcomes included recurrent bleeding within 72 hours, amount of blood transfused by day 30, hospitalization duration, and all-cause 30-day mortality.

Treatment with intravenous omeprazole immediately following endoscopic intervention for bleeding peptic ulcer significantly reduced the rate of recurrent bleeding. This effect was most prominent within the first 3 days of therapy. This intervention also reduced blood transfusion requirements and shortened hospital stays. The presumed mechanism of action is increased gastric pH facilitating platelet aggregation. In 2018, the benefit of this intervention seems so obvious based on its description alone that one would not imagine that such a trial would be funded or published in such a high-profile journal. However, the annals of medicine are littered with now-discarded interventions that made sense from a theoretical or mechanistic perspective but were demonstrated to be ineffective or even harmful (e.g. pharmacologic suppression of ventricular arrhythmias post-MI or renal denervation for refractory HTN).

Today, bleeding peptic ulcers are treated with an IV PPI twice daily. Per UpToDate, meta-analyses have not shown a benefit of continuous PPI infusion over this IV BID dosing. However, per 2012 guidelines in the American Journal of Gastroenterology, patients with active bleeding or non-bleeding visible vessels should receive both endoscopic intervention and IV PPI bolus followed by infusion.