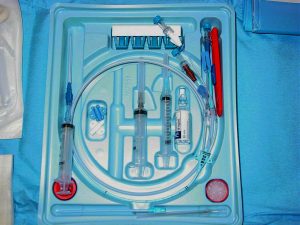 Sepsis is common and, in its more severe manifestations, confers a high mortality risk. Fundamentally, sepsis is a global mismatch between oxygen demand and delivery. Around the time of this seminal study by Rivers et al., there was increasing recognition of the concept of the “golden hour” in sepsis management – “where definitive recognition and treatment provide maximal benefit in terms of outcome” (1368). Rivers and his team created a “bundle” of early sepsis interventions that targeted preload, afterload, and contractility, dubbed early goal-directed therapy (EGDT). They evaluated this bundle’s effect on mortality and end-organ dysfunction.

The “Rivers trial” randomized adults presenting to a single US academic center ED with ≥ 2 SIRS criteria and either SBP ≤ 90 after a crystalloid challenge of 20-30ml/kg over 30min or lactate > 4mmol/L to either treatment with the EGDT bundle or to the standard of care.

130 patients were randomized to EGDT, and 133 to standard therapy. There were no differences in baseline characteristics. There was no group difference in the prevalence of antibiotics given within the first 6 hours. Standard-therapy patients spent 6.3 ± 3.2 hours in the ED, whereas EGDT patients spent 8.0 ± 2.1 (p < 0.001).

In conclusion, early goal-directed therapy reduced in-hospital mortality in patients presenting to the ED with severe sepsis or septic shock when compared with usual care. In their discussion, the authors note that “when early therapy is not comprehensive, the progression to severe disease may be well under way at the time of admission to the intensive care unit” (1376).

The Rivers trial has been cited over 10,500 times. It has been widely discussed and dissected for decades. Most importantly, it helped catalyze a then-ongoing paradigm shift of what “usual care” in sepsis is. As noted by our own Drs. Sonti and Vinayak and in their Georgetown Critical Care Top 40: “Though we do not use the ‘Rivers protocol’ as written, concepts (timely resuscitation) have certainly infiltrated our ‘standard of care’ approach.” The Rivers trial evaluated the effect of a bundle (multiple interventions). It was a relatively complex protocol, and it has been recognized that the transfusion of blood to Hgb > 10 may have caused significant harm. In aggregate, the most critical elements of the modern initial resuscitation in sepsis are early administration of antibiotics (notably not protocolized by Rivers) within the first hour and the aggressive administration of IV fluids (now usually 30cc/kg of crystalloid within the first 3 hours of presentation).

More recently, there have been three large RCTs of EGDT versus usual care and/or protocols that used some of the EGDT targets: ProCESS (2014, USA), ARISE (2014, Australia), and ProMISe (2015, UK). In general terms, EGDT provided no mortality benefit compared to usual care. Prospectively, the authors of these three trials planned a meta-analysis – the 2017 PRISM study – which concluded that “EGDT did not result in better outcomes than usual care and was associated with higher hospitalization costs across a broad range of patient and hospital characteristics.” Despite patients in the Rivers trial being sicker than those of ProCESS/ARISE/ProMISe, it was not found in the subgroup analysis of PRISM that EGDT was more beneficial in sicker patients. Overall, the PRISM authors noted that “it remains possible that general advances in the provision of care for sepsis and septic shock, to the benefit of all patients, explain part or all of the difference in findings between the trial by Rivers et al. and the more recent trials.”